Eight games left in the NBA regular season. The die hard fan has been along for the ride the whole year, but for most of you, the NBA season is just beginning as the playoffs approach. You need a team to root for.

Being the respectable sports fan that you are, you know this is not a choice you can make haphazardly. King James and the Cavaliers? No one really wants to root for LeBron. Chef Curry and the Warriors? Too mainstream. Spurs? Celtics? Come on, they have won enough. Dig down deep into your soul. You want to be ahead of the game. You want to be the hipster of NBA fandom. You want to brag to everyone that you were a fan of your team before they were great.

You want to be a Washington Wizards fan.

Yes, the Washington Wizards. Are you ready to fall in love? It does not take long, let me walk you through it. Try not to blush.

As you probably know, the Wizards are led by North Carolina native John Wall. The four time all star is quite possibly the last true point guard in the NBA. While still a potent scorer, Wall embraces his role of getting his teammates involved. John Wall aka “Optimus Dime” is second in the NBA in assists per game averaging 10.8 per contest and will leave you in awe with some of the passes he is capable of making. Wall just recently set a new career high with 20 assists against the Chicago Bulls. I mean, look at this….

Oh, and he can score and stuff too….

John Wall with the steal and slam! ?

No Batman can be without his Robin, and Bradley Beal is just that for John Wall. The high scoring fourth year player is the perfect compliment to the assist happy Wall, averaging 23 ppg while knocking down 3-pointers at a 40.3% clip this season. Wall and Beal struggled early in their time together to find a cohesive groove but have since meshed their game, the largest contributor to the Wizards success this season. Bradley Beal has established himself as one of the premier shooting guards in the NBA. Just 23 years old, Beal still has plenty of time to add more to his already polished game.

Meet Marcin Gortat, the NBA’s most interesting man and the lovable big man of the NBA. The 6’11 Pole (hah, get it?) has a pig that he refers to as his puppy. The Wizards star big man is known for yelling quotes from 300 as his team runs out of the tunnel, firing up his team with lines like “PREPARE. FOR. GLORY”. Gortat certainly has a little bit of King Leonidas in him, and it is not just the beard. Gortat is the support beam of this team, the lifeblood that holds it all together. The double double machine is as reliable as they come. If you need two points, just dump it inside to Marcin. Gortat is the seasoned vet on this Wizards team who helps bring the young players along.

Every team needs an X factor, and most are lucky enough to just have one. The Washington Wizards have 3. Dynamic swing man Otto Porter Jr., emerging second year scorer Kelly Oubre Jr., and the man who has made the best case in the NBA for sixth man of the year since his transition to Washington at the trade deadline Bojan Bogdanovic.

Porter was the biggest snub from this years NBA 3 point contest. Porter is third in the NBA in 3 point percentage, converting at  44.1%. Unconscious from outside the arc, Porter wasn’t worried about being left out of this years contest. “I’m an in game shooter anyways,” said Porter. And the Wizards are just fine with that. The young rangy player has started every game for the Wizards this season and is just another terrific young piece for Washington to continue to build around.

Kelly Oubre Jr. is remembered by most as the highly touted Kansas freshman from a few years ago. After being drafted by the Atlanta Hawks, Oubre found his way to Washington by way of a trade. Oubre still has a ways to go in his development but has shown fans glimpses of his potential throughout this season. Oubre has the ability to put up points in a hurry and has put up double digit numbers in the past two games. The Dope Soul is already making a case as one of the better defensive players in the league. The Wizards love what they have in the player affectionately known as Wave Papi, and have already picked up his option for the 2017-2018 season.

The Washington Wizards trade for Bojan Bogdanovic could be argued as the best move by an NBA team this season. Bogdanovic was acquired from the atrocious Brooklyn Nets for pennies on the dollar and made an immediate impact for the Wizards. Coming off the bench, Bojan has already put up two 27 point efforts for the Wizards and adds another 3 point weapon for John Wall to feed.

The Wizards are surging and have had tremendous success this season, winning their first division title in THIRTY EIGHT YEARS. All of the remarkable young talent deserves the credit, however the most overlooked part of the Wizards success is head coach Scott Brooks.

Scottie was the man behind the Oklahoma City Thunder’s success for all those years, taking OKC to 2 conference finals and an NBA finals appearance. Brooks was let go after the 2015 season, maybe because he couldn’t quite get the Thunder over the top and they just wanted to rebuild. Whatever it was, it was a huge gain for the Wizards when they were able to pick him up off of the NBA trash heap. The previous head coach Randy Whittman took a very similar Wizards team last year and tanked them to a 10th place finish in the Eastern Conference. Brooks has brought a whole new culture to Washington and has blended the games of all of his young players into a winning formula. Scott Brooks managed to reign in the temper of Russell Westbrook. The Wizards can be molded much easier, and Brooks has already made strides in this departments. A head coach is only but so important in the NBA but those who have the knowledge and ability to lead grown men can make something out of nothing. Brooks has shown that he can win the NBA and his team has already bought into his system. 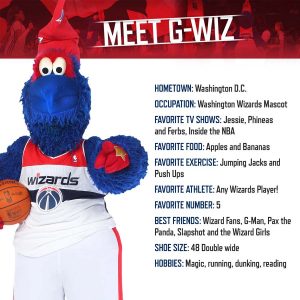 The Washington Wizards are fun, fast, and are rising stock in the NBA. Young stars, blooming talent, a few characters make this team likeable. They are hungry, and are ready to become a perennial power in the Eastern Conference. That may already be the case. Winners of 4 in a row, the Wizards are sitting at third place in the East, just 2 games out of first place. They are coming.

Do you want to be trendy? Do you want to be ahead of the curve, and root for that team that no one really thinks about? The Washington Wizards are the NBA’s next powerhouse franchise and have positioned themselves to be good for a long time.

Hop on this bandwagon while there is still plenty of room.