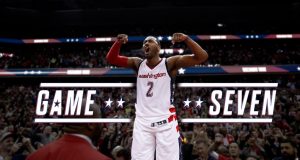 Sometimes sports just come through at the right time, and in the midst of a pedestrian and snooze-worthy NBA playoffs that has everyone talking of foregone conclusions, Game 7 between Boston and Washington figures to be the shot in the arm we need.

After Boston’s pregame shenanigans of wearing all black to the Wizard’s “funeral” Friday night, John Wall and company took offense and put together one of their better performances of the series. Wall went for 26 and Bradley Beal filled it up for 33 and even more impressively shot 57.6% from the field. The duo finally seemed to play in concert, and the whole thing culminated in this John Wall buzzer beater-ish shot.

Wizards on the road

The biggest red flag here for Washington is that they will on the road in Boston, where they have failed to win all season. Yes, somehow through the 6 post-season games and four regular season matchups, neither Boston or Washington has managed to win on the road. Boston opens up as a 5 point favorite in tonight’s game, and sound logic and reason makes the C’s the logical pick in this game. However I am not a man of sound logic and reason. There is no concrete reason for this opinion, but the Wizards just have the chip on their shoulder. To see John Wall climb up on the scorer’s table after his game winner, to hear the cheers of support pouring from the Verizon Center and a Washington D.C city that is pining for a championship, makes you feel like Washington captured every bit of the mythical and intangible momentum ahead of Game 7.

Washington is trending up and as much as the road/home splits are indicative of tonight’s result, think back to game 6 in the Atlanta-Washington series. Washington went through a similar trial in another physical series where the Hawks easily got 2 wins on their home court. But when that critical game 6 rolled around, Washington showed up and handled business on the road in a definitive blowout. Boston is obviously much better than that Hawks team, but it showed that Washington was not just anemic on the road, they can show up to the fight. Washington showed in Game 2 that they can play in Boston, taking the C’s to overtime before Isiah Thomas ripped their hearts out. If they could do it then, why not tonight.

Of course the fate of the Wizards tonight falls to John Wall. More importantly, it will fall to which John Wall shows up in the first few minutes. The Wall-star will come out in full attack mode, can he keep himself under control? Wall is at his best when driving and has the instinct to know whether to dish or score and is plenty apt at both. The important thing is that Wall keeps calm and doesn’t do too much. Washington has not been getting a ton of calls in this series, and home cooking is real in Boston. Tonight is not the night for the calls to start pouring in for the Wizards and Wall has to understand that. Forcing the issue and driving and looking for calls that aren’t there could be the biggest detriment for the Wizard.

John Wall is going to have to be a hero, but not be a hero. Pace, composure, ball security, and distribution is going to be the key for Wall. Get everyone involved early, particularly Bradley Beal. Beal was the leading scorer in game 6 with 33, and if he hits that number again Washington is in good shape. This team is at its best when John Wall is the second leading scorer and has 15+ assists. Beal hasn’t been the top notch second option that he has needed to be for the majority of this series, and if the Wizards don’t want their season to end just yet he is going to have become that guy. Not the second option. The first option.

Boston has a real big 3

This Boston team was built with a big three in mind. While it pales in comparison to the likes of KD, Steph and Klay Thompson, or Kyrie, LeBron and K-Love, Isiah Thomas, Al Horford and Avery Bradley were the building blocks of this team and the supposed foundation for their success. Avery Bradley has been Boston’s most valuable player this series after another big performance Friday night where he went for 27, and Isiah Thomas has been a spark plug all year. Celtics fans moaned about Al Horford all season long, complaining about the lack of superstar production from their high priced big man, but Horford has proven his value this postseason and has been deadly from 10-15 feet and has been knocking down open threes. The three combined for 74 points in Friday’s loss, but if the Celtics had production anywhere else you have to think they could have found a way to win. Boston will be looking for literally anyone else to score some points, and the possibilities are there. We have seen Jamison Crowder get hot in this series, Gerald Green is back to his DNP role but has had 2 good games this postseason, and even Kelly Oubre Jr’s best friend Kelly Olynk has had his moments.

That is what is so scary about this Boston team, whether you cheer for them or not. You don’t exactly know what to plan for, the source of their points is pretty unpredictable from night to night. They put of the feeling that as an opponent you are almost better off if you force them to spread the touches and looks around, avoiding the possibility of letting them find out who’s night it is to be the guy who pops off for thirty. All that, and of course avoiding the 4th quarter assassin Isiah Thomas to hand 25 in the final 12 minutes.

So what does all of this mean for tonight? A Wizards victory, and an extended summer for the Celtics. Maybe this is more hopeful than anything else, Washington is as volatile a team as when it comes to not knowing what team will be on the floor. John Wall is why though…John Wall, the most overlooked and underrated superstar in the NBA is ready to shed that moniker and get the damn respect he deserves. If you want to see a special performance, one that will have pundits gushing over how one player “willed his team to victory” then tune in tonight and be amazed. Somewhere along the line Wall has taken a special offense to this Boston team, as has the whole D.C area when it comes to Boston (see Orioles/Red Sox). This is legacy stuff for Wall.

It can’t be left unsaid how big this game is for the future of these franchises. Two teams on the cusp of running the Eastern Conference for years, who do you think will have the better shot at scoring some of these coveted free agents this summer? The guys who got bounced in the second round? Or the team who handled business and stirred things up against the Cavs? And what attrition do we see from the losing side, what superstar has had enough and is ready to bounce after realizing that their team has peaked? This all points to Washington to me, and again, John Wall. Wall wants to be a Wizard for life, has built this team himself, and this is the year he takes them to the next level.

Game 7, feelings are going to get hurt, the over under on technicals is set at 5 tonight, lets get chippy.