College athletes deserve to be paid

I used to argue vehemently against paying college athletes. Tuition, room, board and books were compensation enough. And even if, increasingly, it wasn't enough and virtually every kid who accepted a scholarship was in the red before Christmas of his freshman year, the notion of pay-for-play was at best a logistical nightmare. Where exactly would the money come from? How could you pay college football players but not baseball players or members of the women's field hockey team? And how in the world would you pay men in a way that wouldn't violate Title IX? 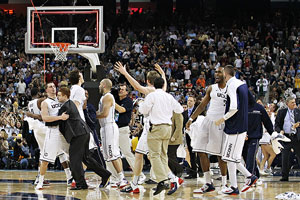 Ronald Martinez/Getty ImagesThe UConn basketball team's run to the NCAA championship generated millions for the NCAA and the university.

So you know what caused me to do a 180 on the issue? That $11 billion deal — OK, it's $10.8 billion to be exact — between the NCAA and CBS/Turner Sports for March Madness between 2011 and 2024. We're talking $11 billion for three weekends of television per year. On top of that, there's a new four-year deal with ESPN that pays the BCS $500 million. So, if those two deals were worth, say, a combined $10 billion instead of $11.3 billion, would the games not be televised? Would the quality of the broadcasts or the coverage or the staging of the events be somehow diminished? What if people in the business of money took $1.3 billion off the top, invested it, sheltered it and made it available to provide a stipend to college athletes, how could anybody stand on principal and argue against paying the people who make the events possible in the first place?

Let me declare up front I wouldn't be the slightest bit interested in distributing the funds equitably or even paying every college athlete. I'm interested in seeing the people who produce the revenue share a teeny, tiny slice of it. That's right, football and men's basketball players get paid; lacrosse, field hockey, softball, baseball, soccer players get nothing. You know what that's called? Capitalism. Not everything is equal, not everything is fair. The most distinguished professor at the University of Alabama won't make $5.9 million in his entire tenure in Tuscaloosa; Nick Saban will make that this year. So I don't want to hear that it's "unfair" to pay the quarterback of Alabama more than all the sociology students in the undergraduate college.

Using the inability to distribute the funds equally as an impediment is an excuse, a rather intellectually lazy one at that. Nothing about the way hundreds of millions of dollars is distributed is equitable or even fair. The BCS' new deal with ESPN was based, in part, on paying more money to schools/conferences with regard to what has been called "population centers." Of the $174 million distributed from five bowl games, 83.4 percent went to six conferences in 2011. In question right now is whether the BCS even conducts its business dealings in a manner consistent with principles expressed in federal anti-trust laws. So, the equitable-application excuse for not paying athletes doesn't hold water; at the very least there's a level of hypocrisy here that ought to make the opponents of paying athletes uncomfortable.

Don't get me wrong, paying players out of individual athletic department budgets is beyond impractical; it's probably not feasible. Because so many athletic departments run at a deficit, it's difficult to make the case that schools should pay regular salaries to athletes, even football players who produce more income than anybody. But it's another thing entirely for the students who play for revenue-producing teams (at UConn and the University of Tennessee, this would include the women's basketball teams) to be somehow compensated from the lucrative television/radio/Internet rights fees they make wholly possible.

It's commendable that the NCAA has paid millions into a fund for in-need athletes to cover clothing purchases, emergency travel and medical expenses. There's also a special assistance fund and a student-athlete opportunity fund. Why can't hundreds of millions of dollars be directed into those, and in turn make money much more accessible to athletes for the kinds of regular day-to-day expenses regular college students pay by working jobs that are off-limits to intercollegiate athletes? 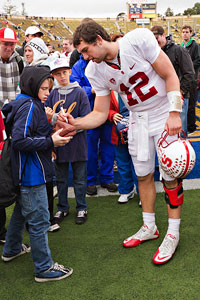 David Madison/Getty ImagesPlayers like Andrew Luck, who are the face of their university, deserve to be compensated.

In the meantime, if they cannot be paid outright, surely the scholarship athletes should be able to engage in entrepreneurial pursuits that currently leads to costly NCAA investigations that have proven to be mostly a waste of time since, one, such activities historically haven't been checked and, two, the kids who commit the "infractions" aren't effectively punished. Their revelations, short of Heisman Trophy winners having to return their statues, wind up penalizing only the kids and coaches who remain on the team and in the vast majority of cases have done nothing to merit a penalty themselves.

If somebody is willing to give A.J. Green $750 or $1,000 or even $2,500 for his Georgia Bulldogs jersey, fine, good. If one of his teammates, a tackle, can fetch only $50 for his jersey, then it'll be a good marketing lesson for both of them. It's called supply and demand, and if both men are fortunate enough to reach the NFL it'll be a lesson worth learning because that dynamic will exist their entire careers. If a soccer player can't get a dime for his jersey, well, there's a realization in that, too.

The question from the opponents of paying college athletes inevitably comes back, "What would stop a star player from agreeing to shake hands at a local car dealership for $50,000?" The answer is, nothing. If a car dealer wants to strike that deal then good for the player in question. If a music student goes out in the summer and earns 50 grand, who objects? Who even knows? The student-musician is no less a college student because he struck a lucrative deal. Neither is the student-journalist who spends his nights writing freelance stories and picking up as much money along the way as he can.

If the student as athlete can find a way, he/she should be able to endorse products, to have paid-speaking gigs, to sell memorabilia, as Allen Sack, the author and professor at the college of business at the University of New Haven has suggested in recent years. The best college athletes in the two revenue-producing sports have always been worth much more than tuition, room, board and books. The best football and basketball players in the Big Ten have produced to the degree that a television network has become the model for every conference in America, a network worth at least tens of millions of dollars to the member institutions. Yet, no player can benefit from that work. The players have become employees of the universities and conferences as much as students — employees with no compensation, which not only violates common decency but perhaps even the law.

Michael Wilbon is a featured columnist for ESPN.com and ESPNChicago.com. He is the longtime co-host of "Pardon the Interruption" on ESPN and appears on the "NBA Sunday Countdown" pregame show on ABC in addition to ESPN. Wilbon joined ESPN.com after three decades with The Washington Post, where he earned a reputation as one of the nation's most respected sports journalists.