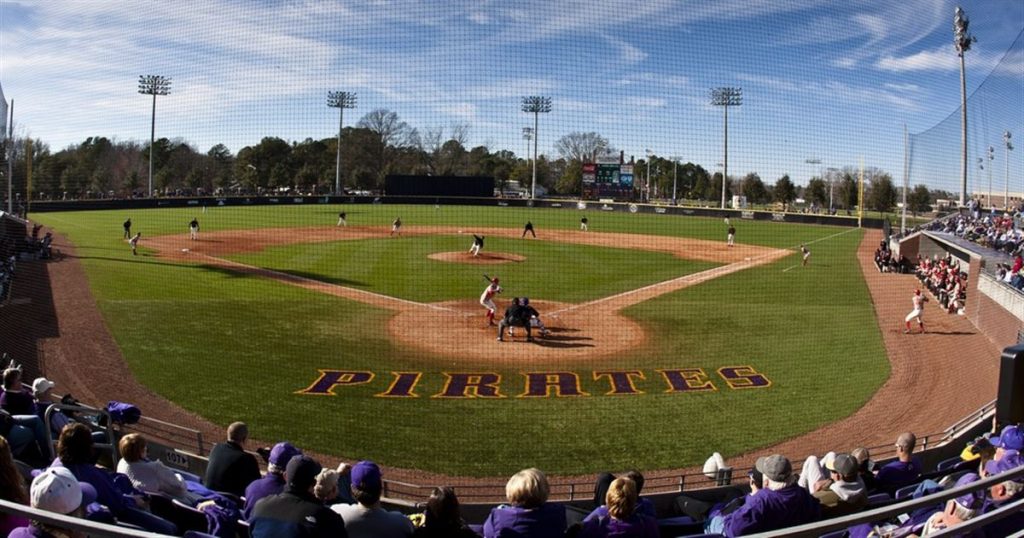 A lot is expected from this year’s East Carolina baseball team. The Pirates garnered their highest preseason ranking in school history checking in at #6 in the Baseball America preseason poll. The Pirates were ranked in every preseason poll, ranging from #6 to #16.

With all the preseason accolades, Pirate fans are expecting one thing from this team, a trip to Omaha for the College World Series. This year’s Pirate team is certainly capable of achieving this goal, returning 6 of 8 position players and only losing last year’s Sunday starter, Jimmy Boyd, from the pitching rotation. Combine the experience with the 23rd ranked recruiting class in the nation, and you can understand the many preseason expectations of the Pirates.

Senior leadership will be key for the Pirates this season as ace Evan Kruczynski, third baseman Eric Tyler, second baseman Charlie Yorgen, first baseman Bryce Harman, catcher Travis Watkins, Saturday starting pitcher Jacob Wolfe, right fielder Luke Bolka and utility player and pinch hitter Kirk Morgan all suit up for the Pirates for one last season. Seniors will not be the only ones contributing to the Pirates success, as juniors Evan Voliva and Davis Kirkpatrick look to provide depth in the bullpen to go along with fellow classmate, closer Joe Ingle. As far as sophomores go for the Pirates, Dwanya Williams-Sutton and shortstop Turner Brown headline the class. Matt Bridges and Sam Lanier shined down the stretch of last season’s super regional run, and Chris Holba has proved that he can be the mid-week starter for which the Pirates have been searching. Holba went 6 innings and only gave up 2 hits and 0 runs in the Pirates win at Campbell on Wednesday.

The Pirates have an abundance of talent between freshman and junior college players making their first appearances in the purple and gold. Freshman, from Bunn High School, Spencer Brickhouse has started the first 4 games of the season at 1st base following the wrist injury to Bryce Harman. Brickhouse had a .548 batting average (136-248) through his prep career, belting 25 home runs. Through his first 4 games at ECU, he is batting .250 with 4 runs scored, 2 RBI’s, and a home run. TJ Riles is also making an immediate impact for the Pirates through their first 4 games. The Atlanta native and community college transfer has started all 4 games for the Pirates in the outfield and is batting .250 with 2 runs scored, a team leading 6 RBI’s, and a home run. Nick Barber, a freshman from Apopka, Florida, has started 2 games for the injured Turner Brown at shortstop, and is batting .200 with 2 RBI’s and has 6 putouts in the field. The local product Bryant Packard, from DH Conley High School, has had 6 appearances at the plate this year. Packard has 2 hits in six at-bats. Jake Agnos, Tyler Smith, Hunter Hood, and Ryan Ross have all made appearances in the first 4 games out of the bullpen for the Pirates. Trey Benton looks to be the Sunday starter for the Pirates. The freshman started the Sunday game at Ole Miss, tossing 1.2 innings and giving up 2 runs on 4 hits. He will be getting the ball on Sunday against La Salle.