The basketball is great, no doubt. But these games have already given us a few Easter eggs that may have flown under the radar.

This dude lost his tooth. Seriously, just a couple of minutes into the game Boston point guard Isiah Thomas had one of his front teeth knocked out by an “inadvertent” elbow from the Wizard’s Otto Porter. I’m not saying it was unintentional, but I’m also not saying it was not unintentional. Like Mike Tyson said, “Everyone has a plan ’till they get punched in the mouth”. Well Thomas had a plan, got punched in the mouth, yet still followed through pretty effectively. 33 points and 9 assists for Thomas in a game which the Celtics fell behind 16-0 to start.

Washington and Boston do not like each other, and this series should go 7 games with the chippiness only increasing along the way. It will all revolve around whether or not John Wall wants to stop calling Isiah Thomas “Daddy” or not. All the while, Thomas will keep balling  out and looking like Toothless from “How To Train Your Dragon”.

LeBron James and his Cleveland Cavaliers are looking at winning 8 straight games to roll into the Eastern Conference Finals unscathed. This uninspired Toronto Raptors team is just not built to go toe to toe with the Three Ring King, and this series will be over soon. But can we take a second to clown LeBron a little bit? For starters, he has once again activated this ridiculous “Zero Dark Thirty-23” thing which he does every single year where he claims to completely remove himself from social media.

Do not lie to me Larry, you’ve been busted.

I am not knocking him for his choice in Instagram account, I can appreciate a perfect booty just as much as the next guy. But don’t pee down my back and tell me it’s raining, we all know you are still on social media Bron Bron, this is just another one of your “look at me” calls for attention. And can someone please get in his ear and let him know “Zero Dark Twenty-Three” makes so much more sense that “Zero Dark Thirty-23” please.

This isn’t about that however. This is about LeBron James being for the kids. Bron wants to be the perfect role model for children growing up everywhere, something no one can knock him for. And to his credit, James is pretty good at this. But then…

LeBron James becomes first NBA player to drink a fan's beer during a game, while on the court. ??? #NBAPlayoffs pic.twitter.com/QRSHjeE2F5

Shocked emoji! How dare LeBron claim to be such a perfect role model, condemning all of the sinners of the world like Charles Barkley only to fake drinking a beer on the basketball court. Shame on you LeBron. Everyone knows Budweiser is a gateway drug, pretty soon rec leagues all around the country will be replacing their Gatorade coolers with a keg and it will all be LeBron’s fault.

I actually thought it was a funny move by LeBron, it actually seemed natural, something we are not used to seeing from LeBron. But leave it to the King to take a funny moment and kill it by making some cringe-worthy joke.

LeBron James on grabbing the beer during Game 1: Not much of a beer guy. If she had had some red wine, I probably would have taken a sip." pic.twitter.com/1O0IqhgiPN 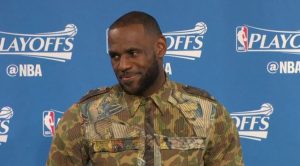 Love him or hate him, LeBron is darn good at basketball, and if he and Kyrie are playing like this then Golden State might even have to look out.

The Houston Rockets and the San Antonio Spurs are at each others throats. Like literally.

Here's the throat grab that got Nene ejectedpic.twitter.com/PpnTys6kmu

Nene and Dewayne Dedmon were both ejected for this scuffle, and that actually irritates me. Dewayne Dedmon is a goon, a noble position in the NBA, but a goon none the less. Dedmon averages about 17 minutes, 5 points, and 15 fouls per game. He’s a seven footer that is only there to stir things up. And getting into the face of soon to be MVP James Harden on the tail end of a 27 point beat down is a great way to do that. But Nene did nothing but stand in and defend his golden ticket to the Western Conference Finals. Eject Dedmon, not Nene, or don’t eject either. Don’t penalize a guy for sticking up for the star of the team when some punk like Dedmon is trying to start something.

Great Win Tonight!! ???Proud of my teammates & the video speak for itself… Just try protect my teammate no bad blood at all… #nbaplayoff https://t.co/szpBiInZtB

The real story here is that Nene has a last name. Hilario? I always assumed that Nene was one of those guys who just had one name like Ronaldinho or Sting.

The Rockets are going to drown the Spurs in 3’s and there just isn’t much the Spurs can do. Houston shot FIFTY threes last night, that might bite them in the rear end sooner or later, but with 4 terrific shooters in Harden, Gordon, Beverly, and Ariza, the Rockets will convert more often than not. Golden State vs Houston will be an absolute SHOOT OUT. Can’t wait.