Was the 2017 Daytona 500 one of the greatest races in Daytona history ? Or is NASCAR benefiting from the smoke and mirror illusion of a bad race cloaked around a last lap pass for a win in the greatest race of the season?  Speaking of mirrors , Kurt Busch’s rear view mirror fell off with 30 laps to go … an omen , he thought… 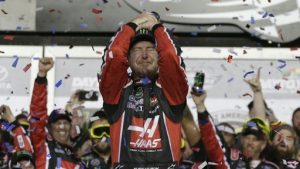 The Daytona 500 , stock car racing’s crown jewel , wrapped up its most recent chapter in the events great history with Las Vegas native Kurt Busch capturing the checkered flag . A remarkable finish that saw the driver of the Stewart Haas #41 car accomplishing a feat that no other winner before him could lay claim to , winning the sport’s biggest trophy having led only one lap the entire day , the final one , the lap that counts.

Fitting that on the debut of the Cup Series’ new title sponsor, Monster Energy , that the longtime driver for the company win his first Daytona 500 . NASCAR also unveiled its new points/event formula  in action, which, despite FOX TV broadcasters Darrell Waltrip, Jeff Gordon & Mike Joy’s constant explanation and approval, still remains a point of contention and confusion to fans. A “New & Improved” formula that NASCAR’s leadership assures us will undoubtedly conquer the issues of falling attendance and TV ratings . So, the question is … Was a last lap pass for the lead and a sell out crowd enough to quiet the criticism ?

A little over Twenty-four hours before the green flag dropped on the “Great American Race”, Daytona International Speedway announced that the Sunday Cup Series race would indeed be a sell out. Great news , especially in light of the lack of anything resembling a crowd at the Camping World Trucks / Xfinity Series events , but even better for the sanctioning body in the fight versus  staunch critics like the Wall Street Journal whose Daytona preview article was laced heavily in doom and gloom.

Kurt Busch drove his Ford into the history books by winning the event on the same day that his brother Kyle and his SHR teammate Kevin Harvick entered those same books as “segment winners” – Part of the new NASCAR formula that divides each race into three segments . The younger Busch brother was caught up in a wreck early in the final segment that saw his Joe Gibbs Toyota finish 38th of 40 entrants . Kevin Harvick would fall victim to “the big one” however ,Harvick is also the first positive example of how the new system may benefit  aggressive drivers with the bonus points seeing the #4 car sitting fourth in the championship standings despite disappointing 22nd place finish in the race.

Most of the weekend was a demolition derby for NASCAR , with races taking longer than ever without mother nature intervening is not a good sign going forward. Daytona is magical, it is the canvass from which great motor sport artistry can be forged into  a racing masterpiece. In the great history of the event only eleven times has a pass for the lead taken place on the final lap and one of those moments took place this year, when Kurt Busch , with a push from the Woods Brothers #21 Ford of Ryan Blaney would go around the Ganassi Chevrolet of Kyle Larson . These moments become great over time, but underneath the late race victory and beyond the 150,000+ in the stands , the question remains whether the remainder of the season, events that aren’t at Daytona and aren’t the 500 will find full grandstands and fantastic finishes and if the new formula will solve the issues facing NASCAR.