He chose the Heat for justifiable reasons, but the way he announced it wasn't pretty

And now I'd like to present … The Column on The Decision, which was announced by The Egotist, who has lost The Respect of The Columnist for jacking around The Cavs, The Bulls, The Knicks, The Nets and The Clippers (yes, even The Clippers) before deciding on The Heat and milking it for every Favre-like minute as he talked about The King in The Third Person.

Please tell me it's over — or is LeBron James still blabbering away about the agony of free agency? 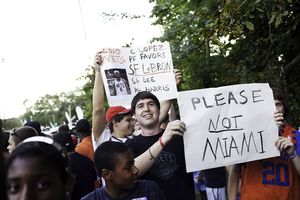 Christopher Capozziello/Getty ImagesThe writing was on the wall for the Heat, despite the writing on this fan's sign.

If nothing else, the James Team's manufactured saga makes you yearn for simpler times, like when Michael Jordan, who actually won things such as championships, announced one of his monumental career decisions in a concise "I'm back" fax.

But no, we got 27 minutes of TV appetizers, followed by eight seconds of LeBron steak ("This fall — man, this is very tough — um, this fall I'm going to take my talents to South Beach and join the Miami Heat"), followed by 33-plus minutes of Worcestershire sauce. The whole thing was semi-ridiculous, although it did reveal a vain, self-absorbed side of James that's as attractive as braided nose hair.

Anyway, he's going to Miami to team up with Dwyane Wade and Chris Bosh! Whooee!

Duh. Where else did you think he'd sign once Wade re-upped with Team Riley and Bosh followed? To Cleveland? Sure, because everyone wants to play for a team with little cap space and Mo Williams as your point guard. To the Bulls and a rookie head coach and a sometimes-dysfunctional front office? To New York and the countdown to Amare Stoudemire's next injury? To New Jersey and more question marks than in this paragraph? To Los Angeles and Donald Sterling and the shadow of the Lakers and Kobe Bryant?

The minute Wade and Bosh chose Miami is the minute The Decision was made. James can (and did) frame it any way he wants, but if winning a championship was his No. 1 priority — and he said weeks and weeks ago that it was — then the Heat made the most sense, followed closely by the Bulls.

Nearly five months ago, I wrote a column outlining how and why a James-Wade-Bosh signing could happen. At the time, the Knicks were the team best positioned to pull off the audacious move. But that was before Heat president (and eventual coach?) Pat Riley started dumping salaries into Biscayne Bay. Then he kept Wade, recruited Bosh and that was that. 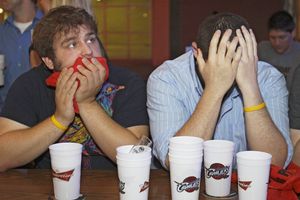 AP Photo/Mark DuncanThese Cavs fans at the Harry Buffalo in Cleveland on Thursday had some trouble appreciating LeBron's seven-year contribution to their city.

I don't have a problem with James' choice. Had he selected anyone but the Heat or the Bulls, he would have backtracked on his free-agency campaign promise of caring only about wins, not money. By signing with the Heat, he'll get both — maybe not as much money had he stayed in Cleveland, but in the short and long run, he'll have a better chance at an NBA title.

What bothers me isn't so much the contrived nature of the announcement, but that James was such a willing participant — if not the creator — of the spectacle. He is an immensely gifted player, the best in the NBA, but he has won nothing. Zilch. Goose eggs. At least Wade has a championship ring. Whatever James won in high school doesn't count.

Can you imagine what Kobe was thinking as he watched Thursday evening's announcement? He must have been seething. He's probably already counting the months, weeks and days until the Lakers play the Heat during the regular season. Knowing how Bryant uses such things as motivation, he's almost surely hoping the Heat win the Eastern Conference and face the Lakers in the Finals.

James did the Heat, the Boys and Girls Clubs of America (with a reported $2.5 million in donated revenue from the telecast of The Decision) and the Lakers a huge favor Thursday night. As for the Cavs, Bulls, Knicks, Nets and Clippers, those franchises deserve better than the dog and LeBron show.

If, as James said Thursday night, he made up his mind that morning, then he owed those franchises the courtesy of a phone call. If it leaked before the TV show, then it leaked. It's not like it was a secret. ESPN The Magazine's Chris Broussard reported ALL day and night that James was a virtual lock to join the Heat. 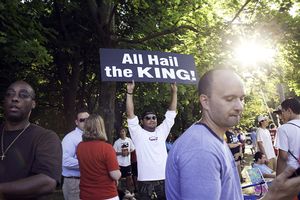 Christopher Capozziello/Getty ImagesNot much doubt about LeBron's clout outside the Boys & Girls Club, at least in this fan's mind.

And is it just me, or is anyone else stunned that James informed the Heat of the decision minutes before the broadcast, but didn't do the same for the franchise that had been his only professional home?

I don't think less of James' basketball skills, but I do think less of his instincts. He didn't grow his brand Thursday night; he grew his ego. It was clumsy, ill-conceived and unnecessary. I watched and winced.

In Cleveland, Cavs fans were burning his jersey. Dumb. Northeast Ohio ought to thank him for his seven years of loyal, blue-collar service, just as James thanked Northeast Ohio for its support. It is, as James has reminded us repeatedly, a business.

But the business of James has become a little less pure and a lot more mercenary. It wasn't who he chose, but how he chose them.

Maybe a championship, if he wins one, will make it all worthwhile. Maybe James will learn a lesson from this botched exercise in marketing. Until then, the way he handled his free-agency announcement will be known by two words:

Gene Wojciechowski is the senior national columnist for ESPN.com. You can contact him at gene.wojciechowski@espn.com. Hear Gene's podcasts and ESPN Radio appearances by clicking here.